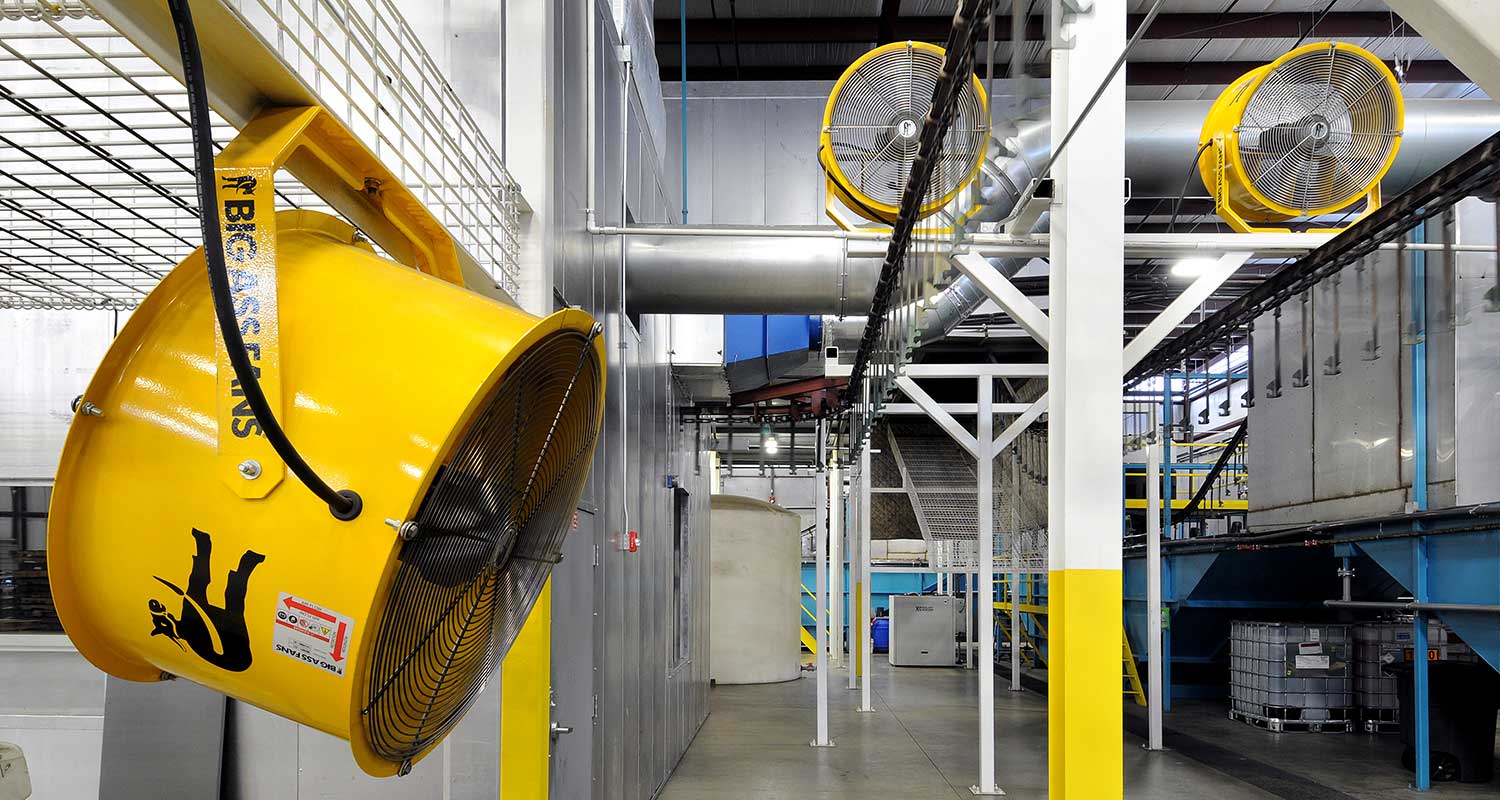 TOO HOT TO HANDLE

Named Fabricator of the Year for 2018, BTD Manufacturing has been growing steadily since it started out as Bismarck Tool and Die back in 1979.

When BTD purchased Impulse Manufacturing in Dawsonville, Georgia, in 2015, it acquired a full-service metal fabricator with a history that included early adoption of new technologies and a commitment to establishing efficient, effective practices to serve its clients, which include names like Caterpillar and Polaris.

About five years ago, Impulse added a new paint line and soon realized it had a problem: after leaving industrial ovens at 350 °F (177 °C), the metal parts didn’t have enough time to cool as they traveled down the conveyor and were still too hot to handle when they reached the end. This reliance on natural convection (using ambient air to cool hot products) forced workers to stop the production process often and wait for the parts to reach a manageable temperature, creating a bottleneck that put a serious dent in the facility’s capacity and productivity.

General manager Clay Reiser considered installing a longer conveyor line to allow for more cool-down distance, which would have cost $40,000 to $50,000 and required a facility shut-down for installation. Reiser needed a faster, less expensive solution that didn’t delay production.

Compounding the problem was the fact that sending hot parts into the paint booth created wasteful paint buildup, increasing the company’s raw material costs. To restore the line to peak capacity and efficiency, the company needed a way to cool parts on the line without resorting to costly facility improvements.

For situations such as Impulse had, natural convection was an ineffective solution that hindered production. In such instances, forced convection via increased airspeed across material surfaces provides a low-cost alternative with high efficacy. Big Ass Fans’ applications engineers are able to calculate the required average air speed (typically expressed in ft/min or m/s) to adequately cool an object, customized for any facility based on the following conditions:

From its industry-first R&D facility, Big Ass Fans accurately records the exact air speeds each of its fans can deliver at different points within its coverage area (known as the Air Velocity Profile, or AVP). Based on a fan’s AVP and the client’s building specs, the applications engineers then design a custom facility layout with the optimal fan quantity, aiming angle, and mounting locations to supply the required air speed to the products on the cooling line.

Big Ass Fans recommended installing several 30-inch Sweat Bees®, precisely positioned with directional flexibility at 20-foot intervals, less than 10 feet away from the products moving on the conveyor. That way, the heated parts would be exposed to the highest-velocity air every time they passed through a fan’s coverage area and thus require the fewest number of fans to achieve the intended cooling effect.

Just two business days after ordering eight Sweat Bee directional fans, Reiser installed them along the conveyor to quickly cool down parts as they emerged from the oven. The fans were an immediately effective solution, allowing staff to use the full capacity of the conveyor and increasing productivity by 25%.

“Sweat Bee fans allow our line to run at 100% capacity,” Reiser said. “Big Ass Fans engineers found a solution for my problem. Our entire team, from the technicians to the engineers, is thrilled with the results. Anyone that works with hot products should use a setup like this.”

Airflow from the Sweat Bees lowered the temperature of BTD’s parts from 165°F (74°C) to under 100°F (38°C) in 20 minutes (down from 45 minutes), allowing for comfortable handling at the end of the cooling process. Additionally, fans installed between the dehydration and paint ovens cooled the metal parts enough to reduce excess paint buildup by 50%. With Big Ass Fans’ custom-made, data-backed solution, BTD’s Impulse plant was able to operate at full capacity and increased efficiency and save money and time, while avoiding costly alternatives such as installing conveyor extensions or a climate control system.

“The Sweat Bee® fans allow our line to run at 100% capacity. Our entire team, from the technicians to the engineers, is thrilled with the results. Anyone that works with hot products should use a setup like Big Ass Fans provided.”

A Georgia-based metal fabricator hit the wall with production delays due to long cooling times for hot products on its conveyor lines.

Big Ass Fans’ Sweat Bees® installed along the conveyor provided the airspeed needed to cool product fast enough for the company to return to full production without costly delays.

BIG ASS FANS ARE “NOT OPTIONAL”

Samuel Jackson Inc. saw instant improvement to both productivity and morale after installing Big Ass Fans. “The return on investment is crazy-high with those fans. Our production efficiency goes up beyond belief,” says Chris. In the hottest weather, he estimated the fans “double or triple what we’re able to produce”; under normal conditions, productivity is improved by 60 percent.

In other facilities, Big Ass Fans’ impact is not always as easy to quantify. But customers without exception rave about the benefits they see in terms of productivity and morale. In summer, Big Ass Fans make work much more pleasant where air conditioning isn’t feasible, and at a fraction of the cost where A/C is an option.

Chris’ youngest daughter once spent a summer in the assembly area at Samuel Jackson. One day, as Chris tells it, work on the building’s electrical service required that the fan be turned off for 30 minutes. “She came into my office drenched in sweat, just soaking from head to toe, and told me in no uncertain terms, ‘That Big Ass Fan? It’s not optional!’” We couldn’t have said it better ourselves. Big Ass Fans is proud to be able to help workers be more comfortable and productive at Samuel Jackson and thousands of other great companies across America and around the world.