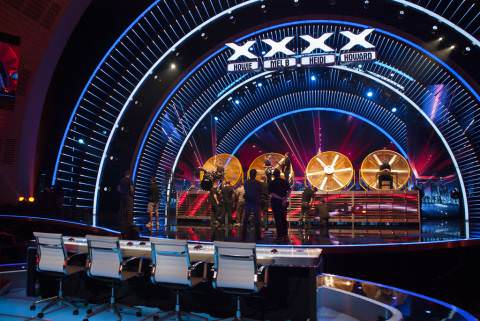 “Talk about a fan base. Those are ridiculous behind you,” said judge Howie Mandel.

The show’s art department approached Big Ass Fans a week earlier seeking products in our signature size. Each AirGo delivers airflow half the length of a football field, so Rose and his backing musicians were certain to be comfortable on stage.

While AirGo fans are mobile, the majority of Big Ass Fans mount to ceilings. Ranging in size from the 60-inch Haiku® designed for homes to the 24-ft. Powerfoil®X2.0 for the largest of factories, Big Ass Fans use energy-efficient motors and advanced airfoils to circulate large volumes of air.

Other television shows and films featuring Big Ass Fans include American Chopper, Loopers and The Dilemma.