Fanny Announces Run for Presidency, Asks Supporters to Vote for the Ass 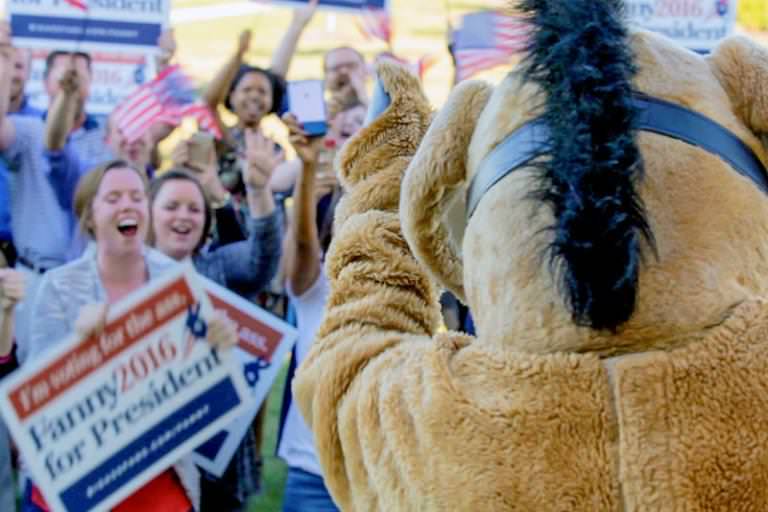 After weeks of urging from her supporters, Fanny is excited to announce her candidacy for president of the United States.

For Fanny, the last straw in her highly personal decision-making journey was the Sept. 26 debate between the two major party candidates. Like so many other viewers, she watched, but could not muster enthusiasm for either performer. She became convinced that something was missing.

Knowing that America is a nation hungry for authenticity, Fanny realized that her time is now. She’s heard people express opinions about the other candidates, and feels she represents a true alternative for Americans — a genuine ass. After receiving a quick “Godspeed” from her longtime boss at Big Ass Fans® in Kentucky, where she serves as mascot and faith healer, she is ready to hit the campaign trail running, on all fours.

As a donkey, Fanny’s credentials start and end with two words: hard worker. Fanny is for a strong America, with clean water to drink, fresh air to breathe and solid ground to graze on. She’s for good relations with America’s neighbors in both directions; in fact, because of her millions of relatives across the globe, she truly sees herself as a citizen of the world.

In the coming days and weeks, Americans will learn much more about Fanny and precisely where she stands on these and many other issues. She has already outlined the basic planks in her platform and her life story at her official campaign website, www.bigassfans.com/fanny.

Fanny urges everyone who feels alienated by the current campaign to show their support by adding the hashtag #Vote4theAss in their social media posts.